When we talk about Swedish design and architecture, it is easy to focus on the modern trends towards materials and lighting and the way that they can be incorporated into a new build. Then there are the formal styles of the Gustavian area and the way that these little details can be brought into a more rustic family home. What we don’t always talk about its the old, colonial-style of Swedish design.

The Lower Swedish Cabin is a prime example of Swedish craftsmanship, design and practical use of space in a 17th-century building. It is a must-see attraction to any historian or architecture student, and the best part of all is that this preserved, the stunning building is right in the heart of colonial North America – not Scandinavia.

How Did This Swedish House Come To Be In Drexel Hill, Pennsylvania? 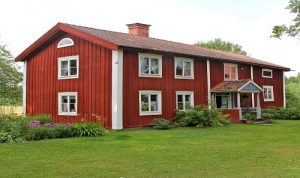 In the 1600s, North America was settled by various communities from across Europe. We often think of the Dutch of Pennsylvania and the English pilgrims that landed at Plymouth Rock, but there are continental influences that go beyond that.

The New Sweden colony, as the name suggests, was founded in Pennsylvania in the mid-1600s, and Lower Swedish Cabin is thought to have been built between 1640 and 1650. Swedes emigrated freely to the area as members of a trading company and the colony grew. We talk a lot about woodworking and careful craftsmanship here, but this Swedish masterpiece takes this to another level.

The look and strength of this house are due to the combination of the great skill that went into its construction and the abundance of ideal materials that were found in the area of Darby Creek. The large flat stones were perfect for creating the walls and the strong oak and chestnut timbers formed high frames and wood roofs.

So what about this cabin makes it uniquely Swedish? 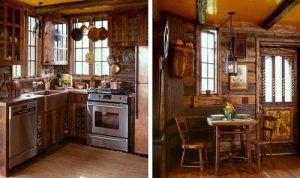 There are three key points here that make this modest log cabin stand out as a Swedish example – even though there are no other remaining Swedish cabins in the area to compare it too.

The roof: The roof is one of the first aspects that experts will immediately pick up on because of the low pitch and the way that the logs have been cut.The floor: Remember what I said in other articles about the Swedish love of a good hard floor rather than a beautiful soft carpet?

The principle sort of applies here too. Granted, they did not have the skill to make the same smooth flooring or soft carpets we have today, but they did favor a hard, clay floor rather than anything more comfortable. The fireplace Another interesting detail is that the fireplace remains tucked away in the corner with a small hearth, rather than proudly out in the middle of the wall.

As I have shown when discussing modern interior design, this little quirk has persisted and continues to bring a homely, Scandinavian feel to lots of homes. Smaller Swedish details can be seen in the use of notching on the wood – which eliminated the need for nails and other fixings – and the fact that the windows would have been covered with sliding boards.

There are also some differences in this style of living, as you would expect given the time, the materials on offer and the situation, but some similar ideas creep in. Around 10-15 years after the main building was constructed, the owners decided to add an extension with a differently shaped roof and a staircase to a raised sleeping area. With time, more thought was given to the presence of windows and The amount of light entering the room – something that is still key in Swedish design.

The restoration of the Swedish Cabin 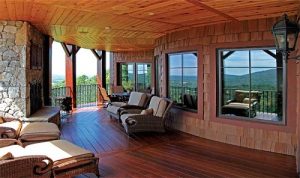 The house was a private residence until 1937, after which it fell into the ownership of the township of Upper Darby. In was then that the house fell victim to neglect. In 1980 it was added to the National Register of Historic Places and the Friends of the Swedish Cabin group got together in 1986 to restore it to its former glory.

This meant some careful work to replace some of the vandalized boards and to repair the roof. The latter took more work than first anticipated because of problems with the wooden shingles on the ceiling. With perseverance, the cabin was completed and opened to the public in 1988. Today you can still visit the cabin if you are in the Darby Creek Valley area to get a whole new perspective on Swedish design and the woodworking skills that have clearly been a part of Swedish construction for centuries.

This site uses Akismet to reduce spam. Learn how your comment data is processed.